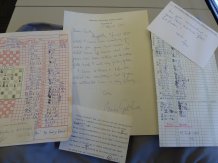 Golding and Curtis played chess together for decades from a distance, as letters given to the University of Exeter show.

They often found themselves thousands of miles apart because of their renowned literary careers. But Lord of the Flies author Sir William Golding and journalist and critic Anthony Curtis never let that stop them pursuing one of their favourite pastimes – chess.

Golding and Curtis played the game together for decades from a distance, exchanging moves via postcards and notes, as letters given to the University of Exeter show.

Chess allowed the two men to have a distraction from the pressures of their deadlines. More than 40 pieces of correspondence between them dating from 1980 to 1993 have been kindly donated by Curtis’s widow Sarah to join the University’s Special Collections, which is already home to all the surviving drafts and manuscripts for the novels published by Golding before 1988, including Lord of the Flies.

Anthony Curtis, who also enjoyed playing backgammon and golf, was a literary critic, writer and biographer. He wrote books about theatre, Somerset Maugham, a play, one-man show, an introduction to an edition of Henry James’s The Turn of the Screw and studies of Virginia Woolf and her Kensington forebears. He was deputy editor of the Times Literary Supplement, literary editor of the Sunday Telegraph on its foundation, arts and literary editor of The Financial Times and latterly its chief book critic, retiring in 1994. He also wrote theatre criticism for the London Magazine and worked as a broadcaster for Radio 3 and 4.

Sir William Golding was born in Cornwall and moved back to the county from Wiltshire in 1985. He was awarded the prestigious Nobel Prize in Literature in 1983, the Booker Prize in 1980, and the James Tait Black Memorial Prize in 1979. His books are today read in more than 35 languages. He was knighted by the Queen in 1988.

The two men, who did meet in person, exchanged chess moves on special cards, which they marked and sent back and forth to each other. They also used postcards and letters to record their next moves. In the correspondence Golding joked that he would write a book about his “hundred most humiliating games”.

The collection includes 12 postcards with informal comments and observations, including remarks by Curtis about a plague of moths in Colorado and Golding about how dirty the sea was in Thessalonika — "Good God, this is an awful place".

Golding writes how he nearly passed out in Athens from the “nephos” — smog. At one point he resigns a chess game "in a temper" and on another he laments that "the moves can't be worse than the trip up the Nile was”. In 1985 he says he has a “lovely excuse” for doing badly in a game because he is “knocked out by the sun”.

Professor Tim Kendall, from the Department of English at the University of Exeter, has replayed some of the games recorded in the correspondence. Professor Kendall said: “This is a wonderful correspondence arising from a friendship based on literature and chess. Curtis and Golding played postal chess, often spending months over an individual game. Posting their next move to each other, the two men also exchanged news about their families and reports of their latest travels. They happened to be mid-game when Golding won the Nobel Prize in 1983 — which, Curtis joked, amounted to a serious psychological blow to his confidence. But in fact, when it came to chess, Curtis usually won the laurels, with Golding occasionally complaining that his opponent was too strong.”

Sarah Curtis said: “Anthony was fascinated by the infinite permutations of chess and loved the game or battle, using his intellect and formidable powers of concentration to play when not reading or delighting friends and family with his conversation and sense of fun.”

"He played correspondence chess during this period with several other friends including Professor Larry Lerner of the University of Sussex, the writer Richard Adams, and the poet and academic John Fuller."