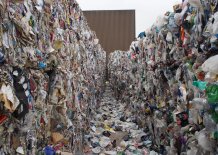 A writer spent a year as a poet in residence at rubbish dumps braving vast flocks of seagulls – and their droppings – to uncover the “hideous” beauty” of landfill sites.

Dr John Wedgwood Clarke spent 12 months in tips around Scarborough, notebook in hand, asking people about the items they were throwing away and talking to the people who worked at the sites..

The experience gave him a unique insight into human behaviour, something Dr Clarke explores in his new book of poetry, Landfill. The poems show how detached we are now from our waste, and how what we throw away shows so much about our lives. Dr Clarke hopes they will make people think more carefully about buying items they don’t need, and throwing usable items away.

Dr Clarke visited the landfill sites at Seamer Carr and Rufforth in Yorkshire. To access Rufforth, an open landfill site, he had to be driven up in a Land Rover and tractor and could only spend ten minutes there.

Dr Clarke said: “I’d driven past Seamer Carr on the bypass and always noticed the great flock of gulls circling over its summit and the slow lorries crawling over it which were like fishing boats or tractors with the way the gulls followed behind them. So while this might seem the least wild part of our ‘natural’ landscape, I also sensed it was a place of great ecological energy, a fertile and exciting place from which to view our culture and identify our behaviour as a species. Also, if there’s a fence around a place, I want to have a look behind it. We used to be able to wander over dumps and chat to the man at the dump who by rescuing rubbish had turned it into stuff someone else might want.

“At Rufforth It felt like I’d landed on the moon of waste. I bounced along in the car over marshy fields of nappies and chicken carcasses and plastic water bottles. They’d had to fire off rockets to clear the gulls before we could step outside.”

Dr Clarke charted the seasons of rubbish sent to the dump as the year progressed. During spring he saw people drop off old garden furniture and mowers. In the summer they got rid of barbecues, in autumn pumpkins and glows-sticks and in January fairy lights.

“Most people who worked on the rubbish site were very welcoming. One man who worked at the dump, got what I was up to immediately. He knew that all the stuff that passed through the site was full of stories. He told me he’d seen people throw medals and photographs into a skip and had managed to fish them out, only to discover they were flying medals from WWII. After keeping them in case the owner returned, finally he gave them to a local museum. Sometimes he’d fish out photo albums unable to imagine that anyone could through their ancestors away,” Dr Clarke said.

“The dump made me shudder and also thrilled me. There’s a hideous beauty to it; a banal intensity that really wakes you up and makes you feel flesh and blood and very mortal.

“The dump is like a big hourglass and all that we consume floods inexorably from our bins, through the narrow neck of the weigh bridge and into its mound. It’s like crematorium: there’s something sad and melancholy about the relentless processing of our lives into extinction. All this is very rich material to be working with. And of course, our waste doesn’t disappear, it is simply on its way to becoming geology.”