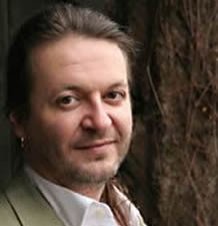 An acclaimed Professor of Gothic horror is to come to Exeter’s Northcott theatre to reveal how Dracula was based on medical evidence of ‘real’ vampires, before a performance of Dracula itself.

‘Prof of Goth’, Nick Groom, who is a world expert on Gothic fiction, is preparing to present to the Exeter audience compelling medical evidence of the ‘real’ vampires that Dracula was based on.

The Professor of English literature at Exeter University has just been commissioned by Yale University to write a book on vampires, and has published widely on the Gothic.

He will explain how Bram Stoker ‘borrowed’ widely from the Devonian writer Sabine Baring-Gould when he wrote Dracula. Baring-Gould, a vicar from just outside Exeter, wrote not only the hymn Onward Christian Soldiers, but a book on werewolves which Stoker was strongly influenced by.

The free talk in the Northcott Theatre bar, on the evening of 31 March, will precede the first-night of a brand-new comedy adaptation of Bram Stoker’s Dracula by local Exeter theatre company, Le Navet Bete.

Dracula: the Bloody Truth, will take audiences on a journey across Europe from the dark and sinister Transylvanian mountains to the awkwardly charming seaside town of Whitby where a frantic Van Helsing, the vampire hunter, stages a life-changing theatrical production of Dracula.

But – echoing Professor Groom’s evidence that Bram Stoker was almost certainly aware of medical accounts of ‘real’ vampire activity in Eastern Europe - the play will turn on the idea that Van Helsing, the nemesis of Dracula, has presented Bram Stoker with evidence of real vampires, which the writer turns into fiction.

The play is a humorous take on Bram Stoker’s original Dracula, the late-19th-century Gothic horror novel about a Transylvanian vampire who comes to Britain in search of fresh blood.

Before the performance, the one-off pre-theatre talk on vampires by Professor Groom, which is free to the general public, and will take place in the Northcott’s theatre café/bar.

Professor Groom - author of a Very Short Introduction to the Gothic - will describe how Bram Stoker’s Dracula was born out of real-life accounts of vampires gathered by doctors and surgeons.

The Prof of Goth, whose talk is designed for the general public and afficionados of the Gothic alike, will read passages from Dracula that mirror medical descriptions of how ‘real-life’ vampires are recorded to have behaved.

With trademark theatrical flourish, Professor Groom will show how Bram Stoker would have been aware of accounts of 18th-century physicians investigating reports of undead monsters who gorged themselves on blood. These incidents led to bodies in Eastern Europe being dug up, decapitated, staked through the heart, and cremated.

The creatures were reported to have sucked the blood of humans and animals and blood would flow from the vampires’ eyeballs, pores, and other orifices. Once dug up, their coffins were said to have been swimming in gore. As a protection against the creatures, local people advised making bread from this very blood against “contracting vampirism”.

Press reports at the time described how in Hungary there were “dead bodies sucking….the blood of the living….. the former are fill’d with Blood”.

The Professor of English literature at the University of Exeter has just been commissioned by Yale to write a book on vampires, and has published widely on the Gothic.

Tickets for his talk on vampires, which will begin at 5.30pm on Friday 31 March, are not required. The talk is free and refreshments and food can be purchased from the bar.

Vampire night is the first in a series of lectures by academics from the University of Exeter for local people tied to theatrical productions at the Northcott Theatre, which is based on the University campus.

Sir Steve Smith, Vice Chancellor of the University of Exeter, said: “The University is delighted to support such an excellent local theatre, and the exciting programme of plays it is offering to Exeter and the South West. I’m very pleased our academics, such as Professor Groom, are working with the Northcott to share their knowledge and expertise on a range of subjects with people from Exeter and further afield. Professor Groom is one of the country’s experts on the Gothic, and has earned the moniker ‘Prof of Goth’. I have no doubt Professor Groom will thrill, and perhaps unnerve, theatre goers with his explanation of just how Bram Stoker came to know so much about vampires.”

Artistic Director of the Northcott Theatre, Paul Jepson, said: “We are delighted to be hosting this event. Partnership between the University of Exeter and the Exeter Northcott Theatre is going from strength to strength and we are increasingly being noticed as a model for a Regional Arts Organisation working creatively and imaginatively with Higher Education. It is a relationship of enormous possibilities. We are also delighted to be opening a new show by our Associate Company, Le Navet Bete. They are an incredibly funny, agile, energised, inventive and engaging troupe. Be prepared for a treat on multiple fronts!”

The play Dracula: The Bloody Truth will begin at 7pm. Some tickets are still available.