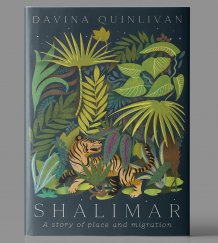 The front cover of Shalimar

A critically acclaimed memoir from an Exeter author and academic is among the selection of literature to have been chosen for the launch of a new independent audiobook platform.

Shalimar: A Story of Place and Migration, written by Dr Davina Quinlivan, will be showcased on the new Spiracle audiobook shop that launches today (Thursday 6 October). With a focus on literary fiction and non-fiction from independent presses and a wide range of other publishers, and the option of a subscription model for members, Spiracle is aiming to establish a more curated approach to audiobook publication.

As part of the deal to release her audiobook on Spiracle, Dr Quinlivan had the opportunity to narrate her own story, recording it over two days at the company's London studio.

Shalimar relates Dr Quinlivan’s upbringing in West London, her Anglo-Burmese heritage, and the influence and legacy of her family, and in particular, her late father. In so doing, she explores themes of the British Empire and the English countryside, and marriage and motherhood, as she describes how she travelled through the world before settling with her family in Devon.

“The book reflects a unique Anglo-Burmese perspective on rural life,” she says. “In exploring my family’s post-colonial legacy, it spans continents and generations, moving from Ireland to Asia and then back to the UK. In many senses, it was meant to be performed, so it felt perfectly natural to record it in audible format.”

The experience of working with Spiracle also chimed with Dr Quinlivan’s interests in sustainability and the wider publishing industry.

“This whole process has offered a fascinating insight into the world of digital recording and distribution,” said Dr Quinlivan, who is a Lecturer in Publishing, in the Department of English and Creative Writing. “Clearly, it brought together my academic interests in publishing with my own creative writing process. But it also reveals how the industry is developing new ways to experience literature. Spiracle’s model is one that seeks to capture that essence of the independent bookseller, without being tied to a physical medium. Audiobooks enable readers to think more carefully about what they consume, and how they consume it.”

Dr Quinlivan teaches on the University’s MA Publishing degree and says this already explores the ways in which ecological issues are relevant to publishing cultures. Her teaching also links to the Common Ground special collections that derive from the eponymous charity that focuses on linking nature with culture.

Shalimar was published in March by Little Toller Books, and is Dr Quinlivan’s first major creative work. She has also authored several film theory books, including a forthcoming entry in the respected BFI Film Classics series. She is also working on her next major project, which will focus on rivers and migration.

The audiobook of Shalimar can be found on Spiracle.