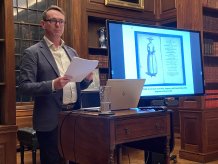 Dr Andrew Rudd speaking at an event in the United States

An expert in philanthropy has taken part in a series of public events in the United States of America focused upon the nature and origins of charity and giving to the poor.

Dr Andrew Rudd has been the curator of Knight Errant of the Distressed: Horace Walpole and Philanthropy in Eighteenth Century London, a special exhibition hosted by the University of Yale’s Lewis Walpole Library.

As part of this, Dr Rudd, a Senior Lecturer in the University of Exeter’s Department of English and Creative Writing, has spoken at a number of supporting cultural events including a round-table discussion with the Center for Public Service and Social Justice, at Yale’s Dwight Hall.

It represents the culmination of a six-year project dating back to when Dr Rudd began a travel fellowship to research Horace Walpole, the eighteenth-century author renowned for writing The Castle of Otranto as well as his charity.

“Many of the debates about charity and philanthropy today have their roots in the eighteenth century,” said Dr Rudd. “Questions such as, ‘Is the existence of charity the sign of a good society or a bad one?’; ‘What are the most effective ways to help people in need?’; and ‘How do charities work alongside the state?’ have been echoed through the ages.

“But there have also been big changes, such as the way charities have evolved from being paternalistic and concerned with ‘saving the needy from bad habits to help them to become useful’, to a greater emphasis on individual agency and the need to break cycles of need. This dynamic is explored in the exhibition through the lens of Horace Walpole.”

The exhibition was launched with a gala event with period music played at eighteenth-century charitable institutions, famously Handel’s Messiah. Supporting this has been a series of events, with Dr Rudd giving a public talk about the exhibition for Farmington Public Library, and then taking part in the roundtable discussion at Yale University’s Dwight Hall, called The Charitable Impulse: Philanthropic Values from the 18th Century to Today.

“This exhibition has sought to situate Walpole in the context of eighteenth-century British philanthropy,” added Dr Rudd. “The rich were expected to support the poor and needy in order to supplement the overstretched parish-based welfare system – and Walpole frequently dispatched anonymous donations to victims of misfortune he read about in his daily newspaper.

“But what makes his charity even more fascinating is that he was drawn personally toward outlandish cases, and this exhibition portrays his active involvement in several high-profile campaigns. Walpole regarded philanthropy as a means to cultivate the curious and eccentric, a discernibly queer philanthropic vision in which he himself played the role of “knight errant of the distressed.”

Andrew Rudd’s work forms part of the University of Exeter’s commitment to promote a fairer society and he plans to explore more connections between philanthropy historically and in the present day.

More information about the exhibition is available via the Yale website.