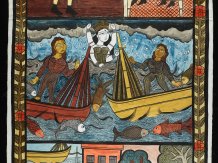 Beautifully illustrated scrolls and graphic art storytelling traditions will help communities to reflect on shared histories of famine in India and Britain and cope with today’s environmental changes.

Traditional patachitra is being used to shed new light on famine and food shortages that have happened in both countries, and the direct relevance the past has for Indian and British communities coping with today’s food crises.

Experts from the University of Exeter and India have been able to map these parallel experiences of famine using evidence from hundreds of historical and literary sources, including poems, plays, sermons, biographies of saints, travel journals, official papers, paintings, and folk tales. The “Little Ice Age” in Europe caused widespread food shortages in the same years as drought affected India, created by El Nino events.

Their research findings are now represented in remarkable artworks by Indian graphic artists and scroll painters. The scrolls will be used by storytellers to tour villages in Bengal, spreading the word about the historical tales and their continued relevance through songs, poems, and stunning paintings.

The scrolls are being painted with natural colours made from flora and fauna by Dukhushyam Chitrakar and family, scroll artists and storytellers who live in Naya village in West Bengal. Graphic artists from Calcutta are simultaneously retelling the stories in a more modern style. The artworks will be shown at exhibitions in Exeter, London, and Calcutta.

Professor Ayesha Mukherjee, from the University of Exeter, who is leading the Arts and Humanities Research Council-funded project, said: “Making people aware of the history of food shortage can help them make sense of the social and environmental issues they are facing today - to do with food security, biodiversity, soil nutrition, and climate change. We are retelling past stories to build cross-cultural understanding and to collectively consider how to face the future.

“Communities like our artists in Naya have relied on the land for food and the natural resources that serve their profession. In the current environment, it is harder to make natural colours, earnings are ad hoc, often dependent on travelling to nearby towns and cities, all of which impacts upon their food security. Our scroll and graphic artists bring sensitive, novel perspectives to the research.”

Some of the most vivid descriptions of famine come from Peter Mundy, a pilchard fisherman from Penryn who found employment with the East India Company after the failure of the pilchard fisheries in seventeenth-century Cornwall. He wrote a travel account, describing the famine in Gujarat in 1630, one of the worst in Indian history, when three million people died from drought. The scroll painters connect Mundy’s early struggles as a fisherman with the food insecurity of coastal communities in Bengal, before telling the story of his experience in Gujarat.

The graphic artists are also using the project’s research database, which contains more than 700 sources, compiled by Professor Mukherjee from 14 archives in the UK and India, including remotely located regional libraries. Transcriptions of the originals, and English translations, can be accessed on the project website, Famine and Dearth in India and Britain 1550 to 1800, jointly created by staff and students at the Institute of Persian Research in Aligarh, Jadavpur University in Calcutta, and the University of Exeter. The Famine Tales website currently showcases the artists’ work-in-progress. The project is supported by the British Library and Asia House, London.

One of the graphic artists taking part in the project, Argha Manna, said: “I am reflecting on the vulnerability of unorganized sector workers, migrant workers, and artisans. In the agrarian and artisanal economy of mid-eighteenth century Bengal, though labouring peasants were most affected by famine, the small businessmen, limestone workers, and boatmen died first. Local economic exchanges at the lowest layers of the economy ground to a halt, without much help. The significance for present-day concerns is striking.”

The project’s co-investigators at Jadavpur University emphasised its contemporary relevance. Professor Abhijit Gupta said, “The project's attempt to revisit and reinterpret instances of food insecurity is invested in both the historical and the contemporary. The artists' retellings of 'famine tales' in the time of an unprecedented civilizational crisis take on an added urgency and relevance.” Professor Sujit Mandal noted.

“The question of food, its distribution, supply, and sometimes an excess of food, that we deal with in our project’s stories, become more relevant now, when food scarcity, especially for the unorganized sector, is a growing concern. This is a time when we can learn a lot from the history of famines."