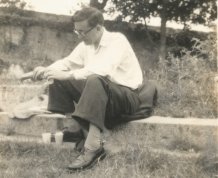 The University of Exeter and the Charles Causley Trust have celebrated current and future collaborations with a special ceremony held online.

The two organisations have cemented their burgeoning relationship with the signing of a Memorandum of Understanding witnessed by representatives from both sides.

Charles Causley was a prolific 20th century Cornish poet, who was narrowly pipped to the post of Poet Laureate by Ted Hughes. He was also a University of Exeter academic and the University holds a large collection of Charles’ poems and papers in its Special Collections, bequeathed by Charles himself, including correspondence between himself and Siegfried Sassoon.

The University of Exeter and the Charles Causley Trust have been working together over the last three years to find ways of maximising the teaching and research potential of the Charles Causley Archive and they have developed a National Lottery Heritage Fund with English Heritage to work together in Launceston to support arts and heritage events in and around Launceston Castle.

This year the two organisations have worked collaboratively on The Causley Digital Festival of Arts & Literature, held in July, and a number of work placements and internships for University students have been organised.

Nicola Nuttall, Heritage Innovation Theme Lead at the University of Exeter, said: “We are absolutely delighted to sign this partnership agreement with the Charles Causley Trust. The genesis for the relationship dates back to when Charles was an academic at the University of Exeter. Charles’ bequest of a large selection of his own papers and poems has led us on a journey exploring research, education and engagement opportunities. The signing marks another significant point in that journey and it is a real pleasure to be working with the Trust to develop future aspirations and collaborative practice.”

Charles, who was born in 1917, was widely published and revered as a poet. He was made a Fellow and Companion of the Royal Society of Literature, received the Queens Gold Medal for Poetry and was Visiting Fellow in Poetry at the University of Exeter in the 1970’s. Charles lived almost his entire life in Launceston and his home, Cyprus Well, is now a writers retreat. He died at the age of 86 in 2003.

The Charles Causley Trust was initially established to celebrate Charles’ work and preserve his home ‘Cyprus Well’ after his death. The Trust has now grown and developed into an organisation that supports and enables engagement with the arts for all and is funded by Arts Council England, Cornwall Council and Launceston Town Council.

The signing and event were held virtually with attendees from both the University and the CCT. It is hoped that a physical celebration will take place in the near future, when Covid restrictions begin to ease.

Kate Campbell, Director of The Charles Causley Trust, said: ‘This signing of the Memorandum of Understanding marks a significant development in the growth of our organisation and the work that we do. We are delighted to join forces with the University of Exeter to work together to create opportunities for people of all ages and backgrounds to engage with literature, the arts and creativity. Charles knew that having a creative outlet was the very cornerstone of his life and I think he would be delighted to know his legacy lives on in this way, encouraging and supporting others. We are very excited for the future’.