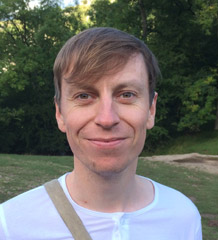 Lecturer in Literature and Film (E&R)

I am a lecturer in literature, film, television, and queer studies.

My most recent monograph is on inarticulacy in art cinema. I am now writing a monograph on queer comedy in post-war British cinema.

I have recently written articles on character in Terence Davies' work and intermedia in the films of Peter Greenaway and book chapters on Agatha Christie's work for theatre and queerness in Doctor Who.

I teach on a wide variety of modules, on film, twentieth century literature, and theory.

I welcome approaches from prospective PhD candidates on related topics.

My most recent monograph explores the relationship between film form and character expression. Both may be seen as articulated structures, that is utterances in which separable parts operate cooperatively to create meaning. I investigate the indeterminate dialectics established by the dynamic relationship between inarticulacies of character and disrupted forms which display their own many-jointed structure. Examples of such formal disjuncture may include contrapuntal narrative levels, clashing styles, discontinuous editing, bricolage, the dislocation of genre signifiers from conventional meanings, and intermedia. The unresolved relationship between parts and whole (reminiscent of a complex mosaic structure) complicates the process of reading for univocal meaning. I am in the process of submitting a monograph for publication. The research was funded by the AHRC.

I am now working on a study of post-war British comic cinema in which I explore the queerness of eccentric form and performance. My interest in queer theory is not primarily about representation and visibility, but rather in the dismantling of the forms and structures of normative (and normativising) thought. In light of this, I am interested in how seemingly normative cinema texts can, through careful formal analysis, be productively queered.

I am preparing a bid for a grant for a major new project on theories of queer television. This new approach will consider the ways in which structures and forms of television exhibition may be seen as queer. This will complicate the common sense account of the historic evolution of television, which describe progress from a primitive and paternalistic transmission model to a liberated and inclusive archive model on digital platforms. I argue that queer theories of the family, of inheritance, and of the closet can inform and enrich this account, and invite us to imagine a new exhibition model which synthesises the earlier models in a new, queer(ing) archive.

I am currently supervising research projects on eugenics in golden age detective fiction and male homosexuality in popular music cultures of Thatcherite Britain.

I am open to discussing research proposals on queer theory, British cinema, British television, critical animal studies, and golden age detective fiction. If you are interested in contacting me about a possible research topic, please send me a 500 word outline and a copy of your CV.

I have taught in both universities and schools, and take this part of my work very seriously. I have devised and delivered a module on Queering British Cinema and TV, which derives directly from my research. I am exploring the possibility of other modules (at both undergraduate and MA level) which stem from my research interests.

I also teach or have taught on the following modules:

In other institutions, I have devised and taught courses on film theory and British cinema.