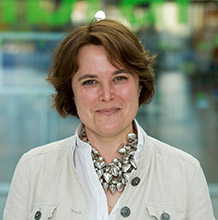 Vesna Goldsworthy is a novelist, memoirist and poet with many years' experience in teaching creative writing and English literature. She came to academia after a career at the BBC and she continues to produce and present radio programmes.

Her first novel Gorsky (2015) was the New York Times Editor's Choice and Waterstones Book of the Month, as well as being long-listed for the Baileys Prize and serialised as Book at Bedtime on BBC Radio Four. It has been translated into fifteen languages. Her second, Monsieur Ka (2018) was one of the Times' 'Summer Reads' choice of best new novels.

Her internationally best-selling memoir Chernobyl Strawberries (2005) was serialised in the Times and read by Goldsworthy herself as Book of the Week on Radio Four. The Crashaw Prize-winning poetry collection The Angel of Salonika (2011) was one of the Times Best Poetry Books of the Year, described by J.M. Coetzee as a 'welcome new voice in British poetry'.

Goldsworthy's Inventing Ruritania: the Imperialism of the Imagination (1998) is recognised as one of the key contributions to the study of Balkan and European identity. Described by Slavoj Zizek as an 'extraordinary book', and by the Washington Post as containing 'enough research to found an academic department', Ruritania is a much translated volume which continues to be taught at universities worldwide.

Vesna Goldsworthy's research interests encompass the practice of fiction and creative non-fiction, especially the memoir and the hybrid forms. She is particularly interested in the intersections of creativity, national and transnational identity, and in writing outside the mother tongue.

Her former PhD students are both creative writing practitioners and English literature academics.

Vesna Goldsworthy is supervising five Creative Writing PhD projects at the University of East Anglia. Three are full length novels; and two works of creative non-fiction -- one focusing on the notion of terroir, one investigating creative responses to motherhood.

Vesna Goldsworthy writes and reviews for, among others, The Guardian, the LRB, the BBC, The Times, The Independent,  OpenDemocracy.Net, Women: A Cultural Review, New Eastern Europe, and others. She scripts, produces or contributes to a range of programmes for the BBC.. Recent examples include:

Something Understood: Finding a Voice in a Foreign Country http://www.bbc.co.uk/programmes/b00vh99s

She is also a regular contributor to the book programmes on TV and radio stations in Australia, North America, Europe, India and Japan.

Vesna Goldsworthy was born in Belgrade in 1961 and has lived in London since 1986. She writes in English, her third language.

She obtained her BA in Comparative Literature and Literary Theory from Belgrade University in 1985; and her MA in Modern English Literature (1992) and her PhD (1996) from the University of London.

She started her working life in publishing in 1986, working as editor for Chadwyck-Healey Ltd (Cambridge) and Editions Alecto (London), then moved to broadcasting in 1990. She worked as producer and presenter at the BBC World Service for ten years. She became a full time academic, teaching English Literature and Creative Writing, in 2000.

Vesna came to Exeter from the University of East Anglia in January 2017.