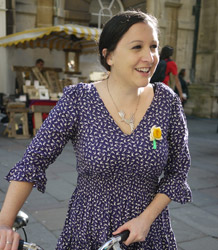 I am an interdisciplinary classicist and historian with a focus on public engagement and engaged research. My main areas of interest are:

I am currently based in the Centre for Medical History and my research crosses the disciplinary boundaries of classics and ancient history; the history of sexuality; the history of medicine; art history; and collecting and museum studies.

I focus on the collection and reception of classical, and other historical, material culture and the way in which this has informed modern ideas about sex and sexuality, especially in the late nineteenth and early twentieth century.

I am especially interested in ‘Engaged Research’, as a new model for research and for engagement outside the academy. See my External Engagement for more details.

With Professor Kate Fisher (History), Professor Rebecca Langlands (Classics) and Dr Jana Funke (English) I co-direct the interdisciplinary Sexual Knowledge unit which considers how we have and continue to construct knowledge about sex and sexuality; the different forms of knowledge about sex that have emerged and been authorized, articulated, disseminated, applied, challenged and revised throughout history; and how they have and are applied in a variety of different settings and for different ends.

I am currently a research fellow on a five-year Wellcome Trust-funded project "Rethinking Sexology: The Cross-Disciplinary Invention of Sexuality: Sexual Science Beyond the Medical, 1890-1940” led by Professor Kate Fisher (History) and Dr Jana Funke (English). The project will run from 2015 to 2020 and seeks to explore the cross-disciplinary exchange at the heart of early sexual science between medical and non-medical forms of knowledge, such as historical, archaeological, anthropological, artistic and literary.

My research will highlight the importance of collecting and material culture for new scientific understandings of sex in the late nineteenth and early twentieth century, in particular how ancient objects and imagery were used as evidence in debates over e.g. historical and cultural variation to attitudes about same-sex relationships and the nature and limits of ‘civilization’.

The project will raise broader questions about the dynamics of cross-disciplinary exchange, and seek to demonstrate how this research can be insightful in debates about sexual health and wellbeing today through an ambitious public engagement and impact programme, therefore feeding directly into questions at the heart of the Medical Humanities.

Classical Reception and history of sexuality

I am affiliated with the Sexual Knowledge, Sexual History project directed by Professors Kate Fisher (History) and Rebecca Langlands (Classics), which pioneers a new direction for the history of sexuality, applying the approaches and methodologies of the emerging discipline of Classical Reception to the study of the ways that ideas about sex and sexuality have developed in recent centuries. Encounters with historical material provide eye-opening and empowering examples of cultural diversity which can expand horizons, open up new ways of thinking and legitimate alternative ways of being.

I am also working (with Dr Jana Funke) on a co-edited volume entitled Desiring Statues: Statuary, Sexuality and History.

My work on the history of the modern collection of sexually-themed artefacts and their treatment within museums has bolstered theories, following Michel Foucault, which challenge the notion of a comprehensive repression of all discourses about sexuality in previous centuries in the West, and points to a moment of expanded debate about sex beginning in the latter half of the nineteenth century.

Previous histories of the modern reception of ancient images of sex have focused on the censorship of this material and its treated as 'pornography' from its mass discovery in the eighteenth century until well into the twentieth. My doctoral thesis used archival research to show that, far from being a source of universal anxiety or embarrassment, hundreds of vases, statues, lamps and other artefacts - all with sexual themes - were being deliberately and systemically sought out by collectors and museums in the late nineteenth and early twentieth century.

Furthermore, my research shows that, influenced in part by anthropological thinking and the notion of the ‘Scientific Museum’, this was part of a movement which treated material culture as the primary source for understanding cultural attitudes and practices: in this case ‘erotica’ was treated seriously as important evidence of ancient approaches to sexuality and sexual imagery.

Colonial histories of anthropology and archaeology

My research extends our understanding of the role of sex and material culture - especially archaeological evidence - in colonial constructions of ‘civilisation’ and the ‘cultural evolution’ of humanity, whether these were used to justify the imperial project or subvert contemporary, Christian society and morality.

I have published on the historical medical collection of Sir Henry Wellcome as a case-study for the way in which ancient amulets and votives shaped as human sexual anatomy were collected in great quantities in the late nineteenth and early twentieth century as part of an interest in links between sexuality and spirituality, and broader connections between health and religion, in more ‘primitive’ societies.

In particular I show that this continued an intellectual tradition originating from the Enlightenment discovery of the ubiquitous image of the erect penis across the recently excavated cities of Pompeii and Herculaneum, as well as the newly ‘discovered’ Hindu temples of India, and which used archaeology, collecting and art history to demonstrate that ‘phallic worship’ and fertility ritual were the origin of all world religions.

I am interested in the emerging category of ‘Engaged Research’ and exploring how public engagement with research can make a meaningful impact on communities outside the academy, and also inform my own research practices in order that my work can be of further relevance for today's society.

Creative Co-Productions in the History of Gender & Science

Transformations is a Wellcome-funded project exploring the history of gender and science with young trans and gender diverse people (aged 16-25). The project asks questions about medicine, identity, and authority through creative workshops, oral history research, creative writing, and performance. The creative showcase including a new theatre performance tours across the UK in 2020. The Transformations project is a collaboration between artist Jason Barker, Gendered Intelligence, the School of Art, Design and Performance at University of Portsmouth, the Rethinking Sexology project, and the University of Exeter.
Transformations is funded by a Wellcome Research Enrichment - Public Engagement award. I significantly contributed to the successful application to Wellcome.
Museum Outreach and Sex Education

Since 2008 I have worked on the Sex and History Project, an award-winning and innovative approach to improving young people’s well-being and sexual health, directed by Professors Kate Fisher and Rebecca Langlands. It uses objects from past cultures as a new and innovative way to discuss sex and relationships. Learning about what people from across time and place have thought about desire, arousal, intimacy, gender, body image, beauty, power and control provides both an arresting focus for discussion, and a safe distance from sensitive issues, that can have a transformative effect.

Stemming from our research which explores the ways in which people throughout history have turned to the past to make sense of sex in their own presents, Sex and History reconstructs such productive engagements with the past to open up new ways of thinking about sex today. For our historical research, this work has provided new insights into the way in which the past can be a powerful catalyst for self-discovery about sexuality, and also the potential for artefacts in particular to act as an accessible and immediate route to learning about past attitudes to sex, and the useful way in which they can be interpreted in many different ways for a variety of different arguments and debates about sexuality.

Sex and History uses museum visits and object-based workshops to add a new, rich dimension to sex education. It empowers young people to make healthy choices about sex and relationships and provides a wider social and cultural framework for the assimilation of biological and practical information about sexual health. The methodology is particularly effective in tackling those tricky subjects outside of the biological, such as relationships, consent, body-image and pornography and the media. We are working with the RSE Hub, Brook Bristol, and other sexual health and education researchers and practitioners on the production of resources for school teachers and to build robust methodologies for evaluating them in an educational context.

Sex and History works with museums and the cultural sector to enhance the relationship between young people and heritage and to shape social change. We focus on the production of creative interpretations of historical objects (including film making, soundscapes, dance, animation intergenerational discussion and exhibition curation) of demonstrable cultural, artistic, social and educational value, using a model of participation and co-production that has the capacity to transform mental, social and physical wellbeing and economic resilience.

In 2017 we received the Pamela Sheridan Award (highly commended) from the Family Planning Association for innovation and good practice in relationships and sex education.

As part of the Sex and History project, I have co-curated a major exhibition at Royal Albert Memorial Museum, Exeter. Intimate Worlds: Exploring Sexuality through the Wellcome Collection (2014) was the first dedicated exhibition of the erotic and sexually-related artefacts collected as part of the early twentieth century historical medical collection of Sir Henry Wellcome. Based largely on my doctoral research, this demonstrated Wellcome’s medical and anthropological interests in sexuality, and the collection stories behind the material which he sent his staff out around the world to acquire. We designed the exhibition and participation programme in order to prompt visitors to (re)consider their own attitudes towards such contemporary issues as censorship and display, gender and desire, the boundaries between childhood and adulthood, control of sexuality, fertility and contraception, pleasure and power relations.

I have also been an exhibition consultant on Desire, Love, Identity: Exploring LGBTQ Histories, at The British Museum (2017), and The Institute of Sexology (2014-15) at Wellcome Collection which featured sexually-related material from Sir Henry Wellcome’s collection, as well as sex researchers throughout the twentieth century.

Other object and archive-based engagement

I have organised and taken part in a number of activities which aim at engaging the public with history through material cultures, archaeology and archives.

I co-developed a well-received AHRC-funded blog project, 'Nemi to Nottingham' which brought together international early career and established researchers to contribute on the subject of the ancient Roman site of the Temple to Diana at Nemi, Italy and the story of the huge collection of anatomical votives found there, as they were redisplayed for the first time in thirty years at Nottingham Museum.

I have co-developed the Making Learning project using craft practices to learn about and connect with history and our own emotional lives. In this we have worked with arts festival visitors, school children, women who have experienced domestic violence and older people. I co-delivered workshops in which we recreated ancient anatomical votives as a way of learning about the ancient practice of representing health issues through an external object, and exploring its potential for wellbeing today.

I was also Library and Archive Volunteer at ss Great Britain Trust, Bristol, (2013-2014) and Roman Handling Sessions Volunteer at Bristol City Museums and Galleries in 2013.

My research has received media attention, for instance my work on homoerotic art collecting.

The Sex and History project which I work on has received considerable media attention and I have made media appearances representing the project, for instance on BBC Radio and and ‘Occupy the Airwaves’, International Women’s Day takeover on Phonic FM.

I also blog for Notches: (Re)Marks on the History of Sexuality.

I have taught on the following modules at University of Exeter:

I am also a member of: