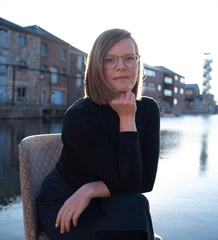 My research broadly covers the areas of Queer German Studies, environmental humanities, and medical humanities and investigates early-twentieth-century sexual knowledge production as a collaborative endeavor between the arts and medical and natural sciences.

My most recent publications include a co-edited special issue on "Sex and Nature" for Environmental Humanities (2022), an article on the importance of intersex butterfly experiments for German sexologists in the 1920s (History of Human Sciences, 2020), and my forthcoming monograph Queer Livability: German Sexual Sciences and Life Writing (Michigan University Press, 2023).

I joined the Department of Modern Languages and Cultures as Lecturer in German (E&R) in 2020. At Exeter, I am also a co-director of the Sexual Knowledge Unit and am affiliate member of Centre for Medical History and the Centre for Cultures and Environments of Health. From 2017-2020 I was a member of the Wellcome Trust-funded Rethinking Sexology project. In 2018 I co-founded Exeter's Interdisciplinary Animal Studies Reading Group, which I currently co-organise with Dr Ginny Thomas (Centre for Rural Policy).

I accept PhD proposals in any of my research areas.

You can sign up for my office hours here.

My pronouns are she/her

I am currently working on two projects related to my interest in the relationship between sexual sciences and European (especially German-language and British) literature, visual culture and performance in the late 19th and early 20th century:

In this project, I investigate the role of animals as well as concepts of nature and naturalness in the development of modern concepts of sex, gender and sexuality in Britain and the German-speaking world. I will investigate medico-scientific texts, as well as cultural, literary and visual sources, in order to explore how non-human animal bodies, behaviours and metaphors are used to develop and challenge changing ideas about the nature of sex, gender and sexuality in late-nineteenth and early-twentieth-century Europe. I aim to show that attempts to naturalise sexuality through animal research do not necessarily incorporate sexuality into a normalising and normative system of reproduction, purity and health, but into more complex ecological systems of desire, fluidity and dissolving boundaries (e.g. nature/culture, human/animal).

My work so far has focused on how moths and butterflies (in particular of the intersex type) have been used in the sexological discourse of the 1920s to argue for the decriminalisation of homosexuality and how sexology has been inspired by performances of the Butterfly Dance, which (I argue) proposes a vision of sexual nature that is not pastoral and cannot be co-opted straight-forwardly into a political project. Future work will focus on the importance of ants, toads and slugs (and more) in the production of sexual knowledge. So far, the project has resulted in an article for History of Human Sciences and a co-edited special issue on "Sex and Nature" for Environmental Humanties. Related to this project I have also received an AHRC public engagement grant in support of the project "Queering climate activism: Engaging young LGBTQ+ people with climate research".

I am currently in the final stages of finishing this project, which comes out of my doctoral research conducted at the University of Cambridge (2012-2016). My book demonstrates how life writing – loosely defined as autobiographies and similar narratives of lived experience – by sexually- and gender-diverse individuals made use of sexual scientific discourses in ways that constructed a new sense of sexual subjectivity. One of my book’s major aims is to approach the historical construction of sexual subjectivity in the context of sexual sciences by prioritizing the voices and textual accounts of patients and individuals who were subjected to sexual-scientific discourses. In doing so, this book goes beyond the dominant voices of modernism and instead pays attention to the subaltern literary voices of sexological and psychoanalytic patients as literary agents. By bringing to bear gender, queer and literary theory to illuminate the intersection between literature and medico-scientific discourses, this book demonstrates that sexological and psychoanalytic life writers are not objective observers, but active participants in the creation and critique of sexual knowledge in the modern world.

I have a wealth of experience in engaging different publics with my research. I have led externally-funded public engagement projects and have collaborated with colleagues across disciplines to develop and conduct engaged research and public engagement activities.

From September to December 2021 I was PI on an AHRC public engagement grant in support of the project "Queering climate activism: Engaging young LGBTQ+ people with climate research". The project uses history and comedy to empower LGBTQ+ young people to play a central role in climate activism.

In 2020-21 I hosted a Creative Fellowship on the topic 'The Politics of Sexual Nature' in collaboration with Exeter's Arts and Culture team. Together with Creative Fellow and comedian Siân Docksey I run the Sex and Nature Salon, which brings together comedians, academics, and the public to investigate how 'sex' and 'nature' come together in popular culture. The Sex & Nature Salon now has a website, too.

Since 2018 I have organised a series of public engagement knowledge exchange workshops with the Rethinking Sexology project, the Sex and History project and the Forschungsstelle Kulturgeschichte der Sexualität at the Humboldt-Universität zu Berlin, as well as NGOs, museums and sex educators. This series of events facilitates knowledge exchange about research-led museum and youth work in the area of gender and sexual health and diversity.

I am also the founder of the AHRC-funded project 'Sex in Six Objects'. The project uses objects from the history of sexuality to talk to young people about gender and sexual health and diversity. Workshops were organised in collaboration with various researchers from the University of Cambridge, the University of Exeter, Anglia Ruskin and the University of Manchester. Our workshops took place at various locations in Cambridge, including the Museum of Archaeology and Anthropology, as well as at the Freud Museum in London. The project has been covered in the local and national news.

I was also co-curator and specialist advisor for the art exhibition ‘Naomi Wilzig and Magnus Hirschfeld: Two Collections from the History of Sexuality’, which took place a the Institute of Sexology Research Center at the Humboldt Universität Berlin in May 2015.

I welcome the opportunity to share my research with the general public. I have given a public talk on ‘Literature and Sexuality’ at the Turl Street Arts Festival at Lincoln College, University of Oxford (2016) and have co-organised a workshop on historical gender and sexual diversity for the LGBT+ History Month event in Bristol (2018) and a tour of the Institute of Sexology for Transgender Day of Remembrance at the University of Exeter (2019).

I occassionaly write academic journalism for The King's Review. You can find my interview with Jacqueline Rose and my article on sex education online.

I have written blog posts for Women in German Studies and Living Languages.

I am the co-founder and co-organiser of the Interdisciplinary Animal Studies Reading Group. I currently run this group with Dr Ginny Thomas (Centre for Rural Policy).

I serve on the jury for the DAAD annual German Language Competition.

The majority of my teaching is research-led in nature. You can see modules that I have contributed to or convened below.

I have supervised MA dissertations for students on the MA Global Literatures and Cultures, MA Translation Studies, and MA English. I am interested in supervising dissertations on topics that cover my teaching and research interests (see Research section)

I am accepting PhD students researching any of the areas covered by my research expertise.