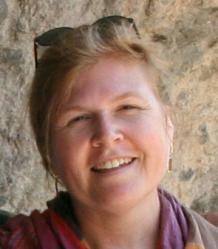 Emma studied for a BA in History and History of Art at the University of York (1991-1994), where she specialised in the Medieval and Renaissance periods. She then worked back in time and took an MA (1994-1995) in Classical and Byzantine Art at the Courtauld Institute, University of London. It was during her MA that she discovered Late Antique Syria, which became the subject of her PhD thesis at the School of Oriental and African Studies (SOAS), University of London.

After graduating from SOAS in February 2001 she spent three years living and working as an archaeologist, fund-raiser, secretary and potato-peeler for the Community of Mar Musa (St. Moses) at Deir Mar Musa al-Habashi in Syria. The Community is dedicated to hospitality and Christian-Islamic dialogue and she spent the summers directing an archaeological excavation for the Community at their other monastery, Deir Mar Elian in Qaryatayn, and the rest of the year dealing with all English correspondence, greeting guests and helping with general chores (hence potato-peeling). During this period she was a visiting lecturer at SOAS and at the Université Saint Esprit de Kaslik in Lebanon. She also worked for the Abu Dhabi Ministry of Information as an archaeologist studying the artefacts found at a sixth-century monastery on the island of Sir Bani Yas.

She joined the University of Exeter in April 2013 and from November 2012-November 2017 worked on a five-year European Research Council funded project entitled Architecture and Asceticism: Cultural Interaction between Syria and Georgia in Late Antiquity exploring the purported Syrian evangelisation of Georgia in the fifth century and seeking to answer why the Georgians left the Oriental Orthodox fold to join with the Constantinopolitan Church in the early seventh century. The results of the project were published as a monograph of the same name by Brill in 2018.

From 2018 until the present Emma has held an AHRC GCRF Networking Grant to work with the Georgian National Museum (GNM) on encouraging children from ethnic and religious minorities to engage with Georgian archaeology and history. Part of this project involves working with Georgian teachers to help them develop teaching plans that make more use of Georgian museums.

Emma's primary research interest is the history, art, architecture and archaeology of the Middle East and Caucasus, with a particular interest in the countries of Syria and Georgia. Her work is interdisciplinary and encompssses all of the disciplines mentioned above.

She also works in the field of cultural heritage and remains in contact with her Syrian friends and colleagues in the hope that some point in the future they will be able to embark upon rebuilding their country.

I am interested in supervising subjects in the following fields:

My completed PhD Students include:

Ahmet Sezgin, Turkey, “Perceptions of  Mimar Sinan from the Constitutional Revolution until the present day”

2000 Homs Citadel Excavation, Syria as a volunteer on a School of Oriental and African Studies project

2000-2004 Founder and Director of the Dayr Mar Elian Archaeological Project (DMEAP) in Qaryatayn, Syria. This is a monastic site founded in late antiquity that later became (and remains) a dual site of pilgrimage for both Christians and Muslims

2001-2002 Post-excavation and bibliographical research on the site of Sir Bani Yas, Abu Dhabi for the Abu Dhabi Islands Archaeological Service (ADIAS) carried out in Abu Dhabi and the UK

2010-  Director of the British-Syrian Mission to Zalabiyeh on the Euphrates, a Byzantine-Umayyad Citadel. Fieldwork began in 2010 but has now been postponed  indefinitely at the request of the DGAM (Directorate General of Antiquities and Museums) due to the situation in Syria

SInce 2017 Emma has worked with the Georgian National Museum (GNM) on developing materials for Georgian schoolteachers and on widening participation activities to encourage disadvantaged, ethinic and religious minority and internally displaced (IDP) children to engage more with museums, galleries and archaeological sites in Georgia.

Emma is a member of the editorial board of the Brill “Texts and Studies in Eastern Christianity” series and a Fellow of the Society of Antiquaries of London.

From 2016 until the present she has been a member of the Peer Review College of the AHRC.

She was awarded the first Frend Prize from the Society of Antiquaries for a young scholar in the field of Christian Archaeology in 2001 and in 2006 she was awarded the Shield of the Jamia’ Abu Noor (Islamic University of Syria) for services to Muslim-Christian understanding.

Emma has an active presence in the media. In 2016 Emma made an episode of the first series ofThe Museum of Lost Objects about Mar Elian Monastery in Syria with BBC Radio 4. She has also made appearances on the Radio 4 programmes In Our Time with Melvyn Bragg discussing the Safavid Dynasty of Iran, Beyond Belief discussing the role religion is playing in the Syrian civil war and Today talking about the threat posed to Middle Eastern Christians by IS. On television she has contributed to the BBC1 National News, BBC2 Victoria Derbyshire Show, BBC World's GMT programme and the BBC News Channel several times to discuss the destruction of the Temples of Baalshamin and Bel in Palmyra. She has also been interviewed for the BBC Farsi television service.

She has has been interviewed widely over a range of radio outlets including BBC regional radio in Manchester, Devon and Berkshire, BBC Radio Scotland, BBC Radio Foyle (Northern Ireland), Premier Christian Radio and Lithuanian National Radio.

In online news outlets she has been quoted on the BBC News online site and the International Business Times, as well as being the subject of a piece on the popular 'Erasmus' column in The Economist online and she has written several articles for The Conversation.

In print media she has been interviewed by The Times and has written articles for The Observer and The Catholic Herald.

All my teaching is informed by my fieldwork across the Middle East and the Caucasus. This means that although my primary research interests lie in the Late Antique and Early Medieval periods, I also work on contemporary issues such as the fate of Christians displaced by conflict in the Middle East and the preservation of cultural heritage in conflict zones. Therefore my modules are strongly interdisciplinary and uses case studies from my research in my seminars.

In January 2020 I was appointed a Senior Fellow of the Higher Education Academy (SFHEA).