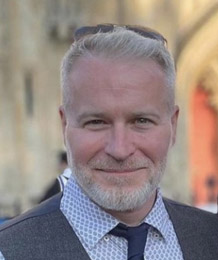 I have previously taught at the Universities of Winchester, Portsmouth, Southampton, and East Anglia. I am a Senior Fellow of the Higher Education Academy. I earned my BA in English Studies with Film and Media Studies at the University of Stirling (2001) and my MA in Modernism (2003) and Ph.D. (2010) at UEA, where I wrote my thesis on football and national identity in England and Scotland.

I'm an Affiliated Member of the Amsterdam School for Cultural Analysis (ASCA) at the University of Amsterdam.  I'm also a member of the Society for Cinema and Media Studies (SCMS) and the Media, Communication and Cultural Studies Association (MeCCSA). I currently serve as the External Examiner for the BAs in Film Studies, and Creative Writing and Film Studies, at Liverpool John Moores University (2020-2024). I have extensive experience of curriculum development, programme leadership, programme validation, external examining, and PGR supervision and examination.

I welcome research proposals from prospective candidates interested in working in any aspect of contemporary media culture. I am especially interested in proposals related to the following areas / themes:

I have previously supervised PGR students working on subjects including political cartoons, radical poetry and political resistance, and the cultural politics of 1980s sitcoms.

Quoted in 'Were the Nineties really so good?', The Independent, 21 January 2023.

Quoted in 'I'm not making any New Year's resolutions this year', glamourmagazine.co.uk, 28 December 2021.

Quoted in 'Gen Z-ers are sending viewing figures for these TV shows through the roof', glamourmagazine.co.uk, 12 August 2021.

Quoted in 'From #Bennifer and Friends to the Spice Girls reunion and 90s fashion, why are we all so stuck in the past RN?', glamourmagazine.co.uk, 17 June 2021.

Appeared in 'Why we become invested in celebrity relationships' [video], washingtonpost.com, 14 June 2021.

Quoted in 'Betrayal and bombast: the surreal story of the Terry v Bridge saga', theguardian.com, 3 May 2020.

Quoted in ‘Friends: The show that changed our idea of family’, BBC.com, 20 September 2019.

I am a Senior Fellow of the Higher Education Academy. I have more than 15 years of teaching experience at a variety of UK Higher Education institutions. I have taught on more than 30 different modules across Media and Communications, Film Studies, English Studies, and Sport Studies, many of which I have written and led. I have also supervised over 125 undergraduate dissertations.