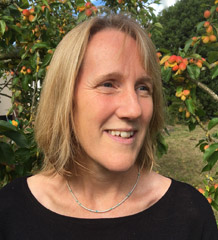 Melissa Percival grew up in Nottingham and did her undergraduate degree in French and German at Gonville and Caius College, Cambridge. She returned to Cambridge to write an interdisciplinary PhD on facial expression in the Enlightenment period. She was appointed Lecturer at the University of Exeter in 1996 and promoted to a Personal Chair in 2017. In the course of her career she has held visiting positions at the University of Tübingen, the Ecole Normale Supérieure, Paris, the University of California Santa Barbara, and the University of Toulouse Jean-Jaurès. Her research has been supported by the British Academy, the Paul Mellon Centre for Studies in British Art, and the Sterling and Francine Clark Art Institute. Recently she was awarded a Leverhulme Major Research Fellowship to write her next book on the global history of French printed textiles.

A specialist in art, literature and history of ideas of the French eighteenth century, Melissa Percival's publications include: Physiognomy and Facial Expression in Eighteenth-Century France (1999), Physiognomy in Profile: Lavater's Impact on European Culture (2005), and Fragonard and the Fantasy Figure: Painting the Imagination (2012). In 2015-16 she co-curated the exhibition 'Ceci n'est pas un portrait': figures de fantaisie de Murillo, Fragonard, Tiepolo at the Musée des Augustins, Toulouse. Her most recent book is Fancy in European Visual Culture, (2020) in the series Oxford University Studies in the Enlightenment. Current research includes the notion of risk in portraiture, and a new project on French textiles in a global context.

Melissa Percival teaches on Exeter's undergraduate degree programmes in both Modern Languages and Art History and Visual Culture. She offers a variety of interdisciplinary and research-led modules, for example on 'the face' and on private life in the eighteenth century, as well as contributing to core French language teaching.

She supervises PhD students on topics connected with the eighteenth-century and also French painting and visual culture. She would be happy to talk to any prospective research students who are interested in working in these areas.

Areas of specialism: Interdsciplinary research on eighteenth-century France. The human face, as it appears at the intersections of art, aesthetics, literature, science and the history of ideas. Theories of the imagination.
Melissa Percival's early research was on theories of physiognomy and facial expression during the Enlightenment period. Her first book, The Appearance of Character, showed how controversial theories linking character and physical appearance gained respectability through the discourses of empirical rationalism, connoisseurship and human aspiration. Her next monograph, Fragonard and the Fantasy Figure offered a new interpretation of the series of dazzling and enigmatic figure paintings by Jean-Honoré Fragonard; these were situated in a wider context of single-figure paintings that blur genre boundaries, pose questions about identity and challenge the viewer. Giving tangible form to her earlier research, Melissa curated an exhibition of European fantasy figures at the Musée des Augustins, Toulouse, in 2015-16. Her identification of the European fantasy figure, and consequent remapping of art history, has been hailed by Colin Bailey in the Burlington Magazine as 'a lasting contribution'. She continues to work on the connections between art and imagination, and has a forthcoming edited volume on fancy in visual culture appearing next year in the series Oxford University Studies in the Enlightenment. Her current research explores the theme of risk in portraiture.
Melissa is actively involved in impact and public engagement work with the museum sector in France and in this country, including local initiatives as part of the University of Exeter Arts and Culture Strategy.