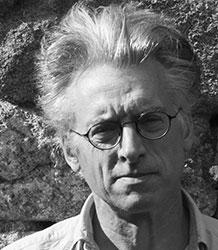 I have published 8 novels and written two films, the first a dramatised account of the life of Beat photographer Robert Frank, co-written and directed by Frank, for BBC Arena, which was a truly terrible piece of writing and yet ended up as 'Object Number W2287' in the Museum of Modern Art. My 2004 novel The Unnumbered was long-listed for the Man-Booker prize and in 2010 I won an Eric Gregory Award. My first novel, The Automatic Man, won the Somerset Maugham Award. I haven't published a novel in 15 years but I have written two books about writing, the first on prose fiction, Five Analogies... and the second about screenwriting, The Instinctive Screenplay, and in 2017 I sold a spec. script to Kevin Loader, producer of the Death of Stalin among many other films, which has fallen by the wayside.

My office is in room 206,Queen's Building.

It will look like a Teams meeting but you're equally welcome to come to Queen's 206 in person. If you can't make it during this time period, send me an email and we'll fix it.

For a biography and a list of publications: www.samnorth.co.uk