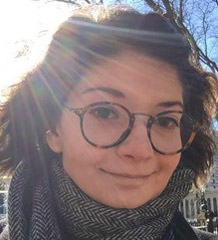 Lecturer in English and Film

Since then my research interests and teaching practice have expanded beyond the realms of erly 20th-century modernisms to include women-authored texts of the 20th and early 21st centuries, autobiographical prose, British persepctions of Russian culture and identity, the figure and agency of the child protagonist in literature, ecology in ficiton prose, and literature in translation.

I joined the University of Exeter in early 2021 as an Associate Lecturer, teaching on the module EAF2510 Adaptations: Text, Image, Culture. Currently I am teaching across English literture and Film studies, specifically on the modules EAF1506 Interrogating Screens, EAF1501 Major Debates in Film Theory and EAS1032 Approaches to Criticism.

I supervise dissertations on modernist literature and film, depictions of femininity on screen and visual media, and non-English language films.

I hold degrees from Royal Holloway University of London and Goldsmiths College. Completed in 2019, my PhD focussed on the early works of Winifred Bryher, more specifically her autobiographical prose and her involvement with the POOL Group and their endeavours at filmmaking, and the journal Close Up.

I have published work on Dorothy Richardson's film criticism for Close Up and another publication on the POOL Group's film Borderline is upcoming. I am currently working on my first monograph.